Ethiopia potato is a household food in the entire country. It goes by the Amharic name of denech. Ethiopia exported potatoes worth $2.39 million in 2017. The bulk of this came from small-scale farmers. The main cultivation areas are to the south-west of the nation along the Great Rift Valley. The tuber is native to Central and South America. The potato is a relatively new introduction to Ethiopia. A German expatriate first grew it in Ethiopian soil in 1858. Interestingly, ‘denech’ became the crop of choice for most highland farmers.  It guaranteed perpetual food even with cereal losses from drought.

The export market receives either fresh or chilled potatoes. The first has a lesser shelf life than its frozen counterpart.  There are also processed ones that come in the form of baked or ground products.

There are also other baked potato products that undergo export.

The rate of Ethiopia potato consumption stands at 25 kilograms per capita. However, the rate changes by year and by type. Below are the main species: 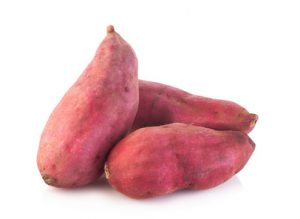 Sweet potatoes: mostly orange-fleshed, sweet potatoes have a higher consumption rate than other tubers in the country. The locals eat between 7.67 and 14.40 kilograms per capita per year. The figures fluctuate by year. The sweet potato production margin in 2016 reached 1.9 million tons. 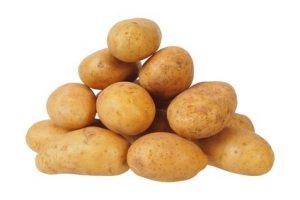 Irish potatoes: The highest Irish potato production year was 2015 when the country produced 1.039 million tons. The margin depreciated in the follow-up years. The processed forms of the produce such as flour and chips have the lowest consumption rate in Ethiopia of 3.91 kilograms per capita. The raw produce receives a consumption of as high as 7.67 kilograms per capita.

Ethiopia might have the highest potato production potential on the continent. The country produces around 921,832 metric tons of potatoes annually. The fields under the crop cover over 509,716 hectares in 2015. It was a tenfold increase from the 2005 figure of 51,698 hectares.

Where are potatoes cultivated?

Ethiopia potatoes come from Awassa. Located 260 kilometers from the capital on a southward direction, the area is synonymous with the tuber. It is at the heart of the Great Rift Valley.  Other places along this belt include Oromia and Southern Nation, Nationalities and Peoples Republics (SNNPR). The Amhara region is also a major source. One interesting production center is Gayint in the north where cultivation takes place at 3000 meters above sea level.

Potatoes require medium to high altitude places to grow well. Most areas of south-west Ethiopia meet the optimum elevations between 1600 and 1800 meters above sea level. The volcanic soils with good drainage in these places are also rich in minerals. The fertility of the soil is a testament to the production of healthy tubers.

Ethiopia potatoes are available two times of the year. The first one is Belg, which is the short rains season that kicks off in March and ends in June. The second one is Meher, the season for the long rains. It starts in July and ends October. Therefore, the harvest timings are in the Ethiopian summer in July and autumn in November.

The harvesting of Ethiopia potatoes follows the same routine worldwide. Workers look for plants with wilted leaves. They gently tip the tuber off the soil with a garden fork. The collected crop goes to the storage house in gunny sacks. Sorting and grading take place in the cold room.

In short, potato production in Ethiopia is one of the highest in the region. The country prides in the cultivation of the tuber for both food security and foreign revenue generation. Because of its importance, the government has set up programs such as local Global Good Agricultural Practices (GAP) to help farmers produce quality exports.

Are you a producer of Ethiopia Potatoes or other products?

Apply to sell your produce directly to buyers worldwide.