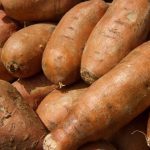 While its oblong, misshapen shape may cheat the eye to look the other way, the orange-flesh sweet potato is a superfood beckoning for exploitation. Traditionally, families in Kenya have subsisted on the tuber as a source of primary nutrition such as starch and vitamin A. It was either roasted on racks upon firewood brazers or boiled to be eaten with beverages. Nowadays, all this has changed as bakery, milling and other value addition practices have visited upon the tuber. Indeed, from as far as Western Kenya, via Kericho to Meru, farmers have gained command of even direct exports. Here we find out the latest aspects that have revolutionized this highly nutritious traditional food.

Value Addition of the Sweet Potato

In Meru, a KSH 50 million processing plant is now catering for the needs of the farmers in the region. The plant provides both bakery and milling facilitation. In actual value, fifty kilograms of the produce brings a farmer some KSH2500 ($25).  This has eradicated the monopoly of middlemen in the mountainside town who offer only three quarters of that price for the bigger 80 kilo bag.

In the bakery aspect, the factory has been facilitating production of at least a thousand pieces of bread daily. Merged with wheat flour, the bright-colored sweet potato mash brings higher nutritional input in bread than its conventional equivalents due to the rich beta-carotene. This is because the tuber has great content of this eye health nutrient that actually gives it the bright color.

The sweet potato baking process follows the initial boiling phase. Once the produce turns mashy it is then ready to mix with baking flour. For cake-making, the sweet potatoes are sun-dried to attain a saturation level of less than 5%. They then go into direct milling into powder ready for making the snacks.

Direct Exports to EU and US

In Kericho, a county that is synonymous with big plantation tea, the sweet potato has heralded a new dawn for family growers who now export directly. The county’s governor signed a trading pact with the diaspora community in Britain in April 2018 for the supply of the tuber from the smallholder farmers. There is a burgeoning need for the tuber in the European Union of 120,000 kilograms each 7 days.

According to statistics, the Europe-based importers will rake out $0.35 for each kilo of the shipment, which is more than double the farm gate price of $0.15. The reason the county is well equipped to supply the resource is its strategic location near the Moi International Airport, Eldoret, a regional cargo hub. Secondly, the EU looks to tropical Africa for its tubers which enjoy organic cultivation and are not genetically modified like those grown in northern latitudes.

The potato revolution in Kericho will be manifest globally as from now on it will enjoy the label ‘Produce of Kericho County.’ This is according to the governor who is so into the EU-Kericho pact that he has since initiated several projects. One of these is a packaging venue that will be situated in a village in the county. So far the local government has received some KSH 0.8 million to begin the building of the plant.

In Homa Bay, farmers have also cashed in on a United States’ based Kenyan change maker. According to an October 2017 story by the Daily Nation, the local has liaised with three thousand family growers in the region to process the crop. This is through the establishment of a multi-million factory that offers value addition to the thoroughly washed orange-tinted root crops.

Yes, the sweet potato in Kenya has become a source for making puree and concentrates. Farmers  in Homa Bay are currently using the untapped potential of sweet potato juice. They process the orange-hued corms using crude puree filter machines. This is after they have put the tubers in hot steam for about 1 hour. These then go into a drying area where they lose the steam heat before going into the juicing machines.

The production of the puree from the tuber needs just slightly more than a quarter of an hour.  The family growers then pack the product into five kilo airtight bags. These retail bags undergo vacuuming before sealing to ensure there is no air or other contaminants.

The processing of the potatoes into puree offers higher nutritional value than their milling counterparts. The latter require boiling first, which might end up damaging 50% of  the vitamin A content in the produce unlike steaming which retains the nutrient.

But what is the use of the puree? Actually, Kenya sweet potato juice is in demand in local supermarkets that make their own bakery products. The puree features as the single largest ingredient after wheat in especially bread making. It contributes about 4 parts in every 10 parts that make the loaf.

Other Currents around the Sweet Potato

Kenya sweet potatoes have also perennially provided leaves for animal fodder.  The crop’s vines have even attracted commercial production of feed. Herders can buy enriched fodder made of the vines during the dry season for their cattle.

In the textile industry, the extraction of the starch from the tuber has become common. In some parts of Africa and Asia, the leaves often serve as a carotene-giving vegetables. In Japan, for instance, the leaves are a preserve of the higher income families who derive vitamin A from them.  This is because almost 98 percent of all sweet potatoes grow and are sold within the third-world nations, which make them a rare treat in the developed world.

The leading potato producing areas in Central and Western Kenya are making do with new processing technologies that are cheap to operate. They have decamped from the trend of boil or roast culture into steam and milling. Unlike the first two, steaming has the capacity to produce results with longer storage duration. As such, here are the main related technologies in vogue:

•Milling is one of the most important methods of adding value to the tuber. It provides powder to feature in, among others, ready-to-fry chips, bread, mandazi and chapatti.

•Puree making machines are now available at low operational expenditure in Nyanza and Western Kenya in places such as Siaya, Bungoma and Vihiga. They fleshed out juice enriches consumer products such as bread by local supermarkets like Tuskys and Naivas. 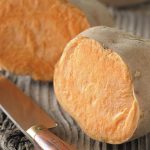 •Slicing is a major source of income for family growers in African countries like Nigeria. It is also gaining vogue in Kenya. It involves just cutting the tuber into pieces before frying it into chips that are richer than those of the Irish potato.

•Potato cutlets and sweet potato cutlets are other products of the technology that has visited upon Kenya’s tuber industry. Normally, family growers use traditional processing, starting with boiling. They then mash the cooked potatoes into easy-to-roll paste that they then engender into eggs before frying them. With additives such as spices and greens, the end product is a nutritious yummy bakery that goes well with chicken salad.

Kenya is one of the leading producers of sweet potatoes in Africa. It ranks behind Uganda, Rwanda and Malawi. China, Indonesia and Vietnam are the leading production countries, all in Asia. Indeed, the third world produces 98 percent of the total volume of the crop worldwide.

In terms of production, it is possible to get 4800 kilograms from one acre through quality organic farming. Average yields however can go to as low as 1200 kilos/acre. In a nutshell, the growth of the orange-tinted sweet potato requires the following handy tips:

•The first step involves acquiring healthy cuttings that are free of pests. Around fifteen full sacks of such materials are requisite for an acre.

•The next stage is to plough land that is about a hundred meters away from an existing tuber field to avoid stunted growth.

•If the soil is infertile, 6000 kilos of farm compost are necessary per acre which converts to 2 1/2 kilos of the compost for every hole of loose soil.

•The cuttings then undergo insertion into moistened and manure-rich soil. Each cutting ought to have an extant leaf and two to three germination nodes.

•Because every vine has the potential to produce eighty new vines, it follows that sweet potato cuttings need ample spacing of about 30 centimeters between cuttings. Rows, on the other hand, require 50-centimeter spacing for spreading area.

•The initial month of planting is very essential in the preservation of the tender sprouting tubers. Therefore, frequent weeding is a prerequisite during the period.

•With frequent watering during the dry season, the tubers will thrive to cover nearly the whole planted area through the vine spread.

•The initial harvest of the tubers takes place between 60 and 90 days from the planting date.  In order to preserve cuttings for the next planting season, it is wise to slice off the vines five centimeters off the ground. The unwanted ones can go into feed for animals. The tubers are then dug out for use at home or for sale.

If looking for export markets, Kenya sweet potatoes are popular in the UK. For instance, several importers in Birmingham have pointed out Kericho as a source of its sweet potato supplies in the future. This will help bring the tropical tuber to some twenty five thousand residents of the industrial city in the UK. To ensure there is quality, the organization behind the scheme known as Sacoma has already launched a 36-month training scheme for cooperative members. This will ensure that the crops they deliver to the modern factory they are setting up will meet the importers’ standards during this peak demand period.

Several trade expos in London have also highlighted a growing demand for the crop from tropical Africa.  The European Union currently requires 120, 000 kilos per week but gets just a fraction of this from Subsaharan Africa. This indicates a growing market for the crop. Kenyans living in the Gulf region have also elicited an appetite for the superfood in countries such as the UAE and Qatar.

To cash in on this new love for the carotene-rich tuber, local farmers are thronging cooperatives. These are helping to offer better access to foreign markets without having to go through paltry-priced brokers. The cooperatives normally have quality body certifications which enable them to export directly.

With the above trends in mind, it does not matter how long but the potato industry is heading to a sweet revolution in Kenya. With the uptake of direct exports in the highlands and the use of low-expense value addition technologies in the lake region of the country, this might as well prove the new source of valuable revenue for farmers. It also converts to the ability of the local produce to meet international quality provisions. Indeed, the fact that the produce that normally sells at $0.14 per kilo fetches $0.35 for the same measure is an indicator that the tuber is heading in the right direction.