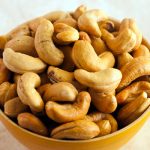 The cashew nut sector has gone through an interesting timeline: from the now nearly 10-year ban of 2009 of raw nut exports to enhance processing to the reliance on Tanzania by processors to meet a 15000-ton domestic deficit, it has been a long road for farmers and traders alike. The following are the latest highlights on the route the country is now taking to regain the capacity of the highly demanded cashews crop.

•Much of the country’s cashew nuts come from the Coastal belt.

•With 10 million kilograms in terms of current production levels, Kenya generates over $2.65 million annually from the sale of the nuts.

•Analysts say that the full capacity for Kenya’s cashew nuts sector is 6 times that figure worth KSH 1 billion ($10 million).

•In recent years, as it has done with other highly export fruits like avocados, the state has curtailed exports but this has led to overboard supplies locally, again necessitating the need for reexport.

•By 2014, Kenya had a documented population of 2.4 million cashews. 90 percent of the trees were available at the Coast in Lamu, Kwale and Kilifi. The data came from the Nut Processors Association of Kenya.

Much of Kenya’s cashew nuts grow to the southeast from the northern coast to Shimba Hills in the interior. In 2009, about five years after the region’s potential had begun to decline, there were about 2.1 million cashews at the Coast. Their average maturity life was about 9 years but they produced their fruits as early as 3 and 1/2 years after planting. Currently, these aged indigenous varieties are under supplementation with new ones that take just 1 and 1/2 years to bear their initial fruits. The new types are of a grafted nature.

A study in 2018 courtesy of Agriculture Business DevelopmentToday showed ebbing numbers of trees in the region and thus the need for the propagation of new varieties. Cashews cease to be productive at sixty years of age. Interestingly, 20% of all cashews at the region according to the study were beyond that age and thus sterile. 73% of the trees were still producing as they were between the average six and forty years of age.  In numbers, the bulk of the productive trees at 783,449 were at their ‘youth’ per se of 6 to 25 years. The ‘middle-aged’ trees of 26 to 40 years of age were 753, 712. This meant that there were nearly an equal number of cashews nearing their twilight as there were those that were still young.

Since the supplies declined in 2014, Kenya crossed the border into Tanzania for replenishments. The look south has led to the government’s search for alternatives, including new dedicated farming belts.

To the rescue, new counties have come up with promising potential. Tharaka-Nithi in Meru is one such area that has as big potential as its Coastal counterpart. The most recent harvest in late 2017 and early 2018 shows that the county made away with 250,000 kilograms of the nuts. Analysts point that this could reach 5000 metric tons in half a decade’s time.

The above figure will bring production closer to the country’s processing potential of 25 million kilograms which Kenya currently barely reaches. In fact, since the Coast dipped its productivity by 40% in recent years, the total production is just 10 million kilos. With the input of Tharaka Nithi and other counties, this margin is set to double in the near future.

The current paltry 10,000 tons under production could go higher and so will revenue climb if the government’s schemes come to bear on the sector. If  the deficit of 15,000 tons is met with renewed production at the Coast and the bringing of fast-maturing cashew nut trees in the Mount Kenya regions, the country might make its $1 billion target worth of returns. One of the difficulties to solve first will be on remuneration.

Currently, brokers control the market despite the establishment of special collection zones en-route to processing plants. Indeed, most brokers rely on the processing plants rather than direct exports after making purchases from the farmers. If the trend could reverse and family growers were able to deliver directly to the processor, they would have more motivation to produce more.

Brokers offer as low as KSH 20 ($0.2) for each kilo of cashew nuts, which demotivates family growers to maintain their fields. In the world’s leading production sources of Ivory Coat, Mozambique and other West African nations, farmers get anything from an average $0.3 to $0.4. The same goes for the ministry of Agriculture in Kenya, whose processors pay similar amounts to those who deliver the cashews for processing. Most happen to be middlemen.

During the rise of farming of cashew nuts in Tharaka Nithi, farmers in traditional cultivation areas have also gained momentum. This is bringing back memories of the days when they used to obtain the best remuneration on the continent. They would get a minimum of KSH 45, which could hit KSH 48 ($0.48) at the best seasons. This was even better than the farm gate offer in Burkina Faso of up to $0.4. Hence, it is unthinkable that family growers would be willing to accept more than half that price from middlemen especially in these times of high demand. The Ministry currently has recovered this prestigious buying price. 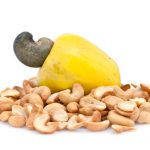 Kenya has the potential to generate more than half a dozen times its current capacity of $2.65 million in income from the cashew nuts resale and export. This is possible through the solving of the challenges that contribute to failure. Some of these include crop loss due to pests and diseases especially in Kwale.

A major pest that decimates half the realizable nuts are bugs. The Helopeltis bugs, in particular affect the blossoming and eventual poor productivity of the cashew nut plants by breeding in their reproduction areas. They are very distinct-looking insects that are minute in size (just 10 millimeters in length) but with overwhelmingly long antennae that decimates their body in two.  Their eradication can see the full development of the fleshy apple and the hanging nuts which are stunted in their presence.

Another blotch whose eradication can help Kenya cashew nut sector generate its target revenue is cashew disease. Fungal diseases work hand-in-hand with bugs to decimate the shoots which reduce plant development. They leave black spots on the leaves and cause eventual permanent damage to the fruits.  They also lead to retarded growth of the tree with late maturity.

Some of the eradication measures of especially bugs is the Kenya Agricultural Research Institute (KARI)’s programs aimed at nut diseases’ control. The institute recommends both natural and synthetic methods. The organic ones include frequent checkup of the field as the bugs come like locusts all at once especially during the wet times of the year. It is also a recommendation to keep weaver ant habitats on trees: without attacking the plant itself, the ants inhibit the prevalence of the bugs. It is also essential to plant cashews with legumes and vegetables but keep off tea and sweet potatoes in particular as these bring about the Helopeltis bugs.

Investing in irrigation could also be the magic wand for preventing crop failure. Currently, about 21.2 percent of intermittent production owes to poor rainfall patterns. This could change with the continued championing of areas with better rainfall patterns like Tharaka Nithi than the Coast.

Other factors for the realization of the $1 billion revenue-generation capacity is the existence of the 25000-ton processing plants in the country. This owes to post-independence years’ reliance on the bloated performance of the sector-Kenya had its highest cashews sale of 36,000MT back in ’78. Between that year and 2004, the sector came almost to a standstill. Nevertheless, the drop of the production to a ten thousand-ton mark does not imply that processing has stopped. Indeed, the years 2005 to 2012 saw a gradual increment in the full capacity operation of processors partly from replenishments from Tanzania.

The main factories include the Cashew Nut Factory or CNF that the Kenya Nut Company founded in 1998. It was a reasonable step to establish the plant in Malindi as by that time it was clear that the nuts were a popular snack and value added commodity both in Kenya and abroad.  The factory went on to meet supply capacity of a multi-county sourcing zone that includes Shimba Hills, northern coast, Msambweni and Kilifi, besides the home town.

Another world-class factory for all kinds of nuts-primarily macadamia-is the Thika plant. Its stone throw distance from Nairobi by road makes it one of the most strategically placed for export by air.  It also offers the Central agricultural region processing agility for tea, coffee and cashew nuts, making it a jack-of-all-trades.

In 2009, the country banned the export of table cashew nuts. Unlike the more recent avocado ban of 2018 that was a result of low local supply, the reason for the cashews curtail was to help birth local processing plants and create self-sustenance. The move led to the rise of multi-million factories by the Kenya Nut Company, including a KSh400 million one by a  processors association in 2014. This has led to nut-ready factories but no nuts. Recourse measures have been reliance on Tanzania for supplies but this may need to change if local exports of processed products will regain its edge.

One such effort is from sponsors: the European Union is at the frontline at enhancing production to insure future exports through a three-county funding drive.  Courtesy of the European Trust Fund, family growers in Kwale, Lamu and Kilifi counties will receive financing from the Farm Africa-supported initiative to up their production.  The main offers are certified seeds that will see 15,000 family growers plant new plants over the next four years. Besides, they will also receive sesame seeds, which will provide extra income in the otherwise poverty-hindered counties.

The trust fund is also planning a regional factory that will process about 2.4 million kilograms of the cashew nuts on a yearly basis. The strategic placement of the factory will see the small scale farmers get a proximate location to directly retail their harvests. They will also get certifications to make them as competitive as brokers at exporting their own hard-earned harvests.

Thus, the overemphasis on local processing can uplift Kenya as a champion of value addition among African nations that perform lowly in this aspect. For instance, of the 900 million tons of cashew nuts that Africa produced in 2012, just 50 million tons underwent local processing. Banning raw nuts but facilitating direct sales of the produce by the farmers to the processing venues at reasonable rates can mean the same to the farmer as exporting directly.