Kenya is the largest tea exporter in the world due to its premium black variety. In 2016, it supplied 27 percent of the total global sales. This was 8 percent and 15 percent more than the closest rivals China and India, respectively. China produces ten times as much tea as Kenya’s output while India has nearly five times more volume yet the two Asian countries export less. In coffee, the trend is slower than that of rivals Uganda and Ethiopia, but is still a mainstay of the economy. With this in mind, here is a look at how the two top horticultural crops keep the economy in the face of price and operating challenges.

Coffee is the third foreign exchange generator in the country following in the heels of tea and horticulture (vegetables and fruits). 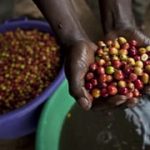 Coffee first grew in Kenya in 1896 courtesy of the European missionaries. It has always been a smallholder crop supplemented by a few big plantations that constitute the minority. The Kenya Coffee Board oversees the activities of over 700, 000 family growers in places like Subukia, Nyeri, Kiambu, Thika, Meru, Kitale, Kisii and Taita Taveta who farm the crop as part of close to 500 cooperative societies. There are over 3850 estates that constitute the minority of big plantations.

In spite of being the mainstay of the economy, Kenya coffee has been depreciating in volume over time at a yearly rate of 60%, beginning 1995. Analysts cite the decrement as due to state non-involvement in field extension services to family growers. For instance, the 1980s’ extensive research which led to the introduction of such coffee varieties as 1985’s Ruiru II is no longer in application today. Hence, there has been the issue of quality that has plagued the sector with the low governmental input.

The biggest push and pull effect in the industry was the eradication of the quota concessions of the post-independence days. This was a system where coffee attracted impressive payments across the world markets. The end of the quota system at the crest of the last century  through United States’ agitation saw farmers experience a sharp decrement in rates. The ramifications are still overshadowing the industry to date.

In 2016, Kenya produced 49, 980 metric tons of coffee.  This placed it at position 16 of world producers. At the top of the apex was Brazil with almost 50 times more coffee output than Kenya at 2.6 million tons. Ethiopia remains Africa’s top producer with 384,000 metric tons while Uganda follows with 288,000 metric tons. Uganda is a net exporter of Robusta, a lesser-preferred variety than Kenya’s Arabica.

World Bank’s International Finance Corporation (IFC) initiated a remedial program to reclaim the sector in 2013. The ongoing program aims to incorporate nine thousand family growers to push their per-tree-conversion by five kilos. Not only will this improve the per capita of the farmers  towards the bankable $475 worth of income, but it will boost the country’s GDP from coffee exports. Current earnings per farmer is as little as $200 according to IFC statistics.

There are also projects with an aim to strengthen financial access by cooperatives who then offer their members easy funding. Combined with relevant training, it is now possible for family growers to get back on their feet after the start of the near collapse of the sub-sector in 2011.

Overall, coffee provided some KSH100b ($1 billion) to Kenya’s economy, beginning in the year 2001 till its bleakest year of 2011. It is notable that this was a period of decline, which began midway in the 1990s. The fact that the struggling sector still managed such a huge economic contribution to the  country underscores its ability to be a net earner. This is possible when the right mechanisms such as training, credit services and field extension programs are revived.

One way out is to encourage beverage drinking habits locally. Countries like India and China use the bulk of their coffee internally and thus do not suffer offsets in international market prices. Ethiopia, Africa’s number one net exporter sells half of its coffee internally, a secret to why the country’s sector performs well. Kenya, on the other hand, consumes just a paltry 7 percent of its coffee, perhaps due to the popularity of tea as the beverage of choice. Thus, family growers cannot rely on supermarkets or local markets but have to take their produce to the auction. Another reason is the traditional popularity abroad of the pleasant Arabica variety from Kenya that international buyers use to blend with strong-flavored varieties, which makes most growers to seek to export their coffee at poor prices.

Another way are the reforms that the Office of the President instituted in 2017 but have since then met an implementation deadlock. The reforms sought to give family growers more leeway in the control of the produce through the ouster of cartels. Currently, SACCOs monopolize all coffee the farmers deliver as the direct pay line between the mill and the farmer. This has led to the rise of cartels that exploit farmers with promises of better rates.

If the above reforms take place, both sectors, especially the struggling coffee niche will see some light since the last best year of 1995.  This will also prevent the removal of coffee from auction houses in Nairobi due to low prices. This happened in March, 2018, when the foreign market dipped the rates per pound by 30 cents which affected producers auctioning their coffee in Nairobi.  Similarly, a 50kg bag was retailing at KSH26300 in October 2017 before coming down to KSh24, 600 this March.

Tea as the Strongest Agricultural Export from Kenya

Not only is the country the largest producer of tea in Africa but it also exports more than any other nation.

Tea first grew in Kenya in 1903 courtesy of missionaries and for the first two decades it served as a subsistence crop. The first establishment of a tea estate for commercial use was in 1924. By 2017, the production rate had hit 412,000 metric tons worth of the black variety, which essentially placed the country as the world’s leading net exporter.

The main growing areas for both smallholder and tea estate farms include, Limuru near Nairobi, Kericho and Trans-Nzoia in the Rift Valley region, Kakamega in Western, Nakuru in the north Rift, Nyeri and Meru in the Mount Kenya region, and Murang’a in Central. These regions enjoy conducive climatic patterns inclusive of mild hot and wet spells and high altitude locations with fertile loamy soils.

The best-performing year in recent times was 2012 which also attracted the highest price of $3.18 per kilogram in the Mombasa Auction house. 2017 was a lukewarm year as the output went down by 21 percent in comparison with 2016, using statistics of the third quarter of the year. Some of the  reasons for the depreciation was the drought that affected the county in the first half of the year.  The march through May rainy season  failed in most tea-producing regions in the Rift Valley and Western, which meant low output.

As a reflection of the significance of perhaps the best known agricultural export from Kenya, here is a list of countries that Kenya exports tea to in 2017 and their percentage margins:

•The rest of the world-14 percent.

Pakistan as the largest importer, has however in 2018 stipulated a reduction in shipments following Kenya’s imposition of new guidelines that will affect trade. Some of these include the reinstitution of auction houses, which most family growers depend on to reduce tea theft and unscrupulous sales. This regulation may affect existing trading relations with mainly Asian destinations.

Tea has always attracted relatively stable prices in comparison to coffee. But this is not as attractive to the economy as many would wish because most of the major tea-exporting nations manipulate prices which affect those from African exporters.  Here is a historical comparison of tea prices that farmers have received per kilo since 2011 in the national auction:

Another effect that always visits the tea sector in Kenya is the country’s denomination rate against the dollar. For farmers being paid in Kenya shillings, the year 2016 saw a depreciation in KSH vs $ of 4 percent. This meant that farmers ended up being paid 18 percent less than similar values for the previous year.  The devaluation of the shilling due to inflation has also implied low conversion of what family growers receive and thus the need for higher payments which in turn depend on the auctions.

Finally, the KTDA-non-regulated tea estates also failed to balance their act in 2017 after the workers lay down their tools. This impacted the overall sector with multi-million losses in operating revenue. The strike took place over wages and poor working conditions at the culmination of 2017.

Comparatively, Uganda was slated to harness  better growth in 2017 owing to similar trends in the previous two years. In 2016,  the nation generated some eighty million dollars from the sector, a four-million dollar hike from 2015.  This is despite the Uganda’s tea sector being less important in comparison to its robust coffee sector. Nevertheless, it is East Africa’s second major grower and exporter of tea after Kenya.

Thus, the improvement of the tea and coffee sectors in Kenya will help better the lot of both farmers and the government.  The introduction of a coffee auction in 2017 has benefited family growers in spite of the frequent fluctuation in prices. Investment in high quality coffee for foreign markets also makes sense for a country that drinks less of its own produce. If Kenya borrows a leaf from its neighbors Uganda and Ethiopia, it would maximize on the possible benefits of the horticultural produce. For instance, Uganda’s output of Robusta is high in numbers but incomparable to the premium value of Kenya’s Arabica and yet the former country makes more sales than its eastern neighbor due to policy reforms. For tea, the sector still provides the best foreign income for the country and improvements will see it recover its traditional appeal.